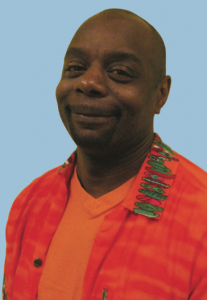 "I have a mission to give back. In this society a lot of people believe they lose when they give... I know when I give, it comes back tenfold."

When Gregory walked through the doors of Horizon House he was traveling light. Despite having a stable, full time job for years, his clothes and a few precious possessions were hidden in nearby bushes. Gregory was homeless.

First, a storage space for his few belongings was provided plus a place to shower. Then, a case manager reached out and began to plant a seed within Gregory that would both identify the root cause of his homelessness and target a way to overcome it. Gregory was a “functioning addict” who easily held a good job but had not been able to overcome the temptation of squandering his income feeding an addiction. Gregory says of his case manager, “He had to completely re-wire me; He helped me face reality. I didn’t know how to manage my money, but he taught me.”

Gregory’s quality of life improved. Gregory maintained his job and overcame his addiction, eventually becoming a supporter of Horizon House. “I have a mission to give back. In this society a lot of people believe they lose when they give…I know when I give, it comes back tenfold.” Gregory is grateful for the seed his case manager planted in his mind — “failure is not an option.”

Every day nearly 200 homeless neighbors come into Horizon House. Elnora was one of those neighbors. When she first visited, she was living in her car. She had moved to the area to pursue a relationship, but the relationship did not last. She had obtained employment but lost her job. She had no other support from family or friends.

She found herself homeless and scared. Elnora needed a fresh start and she desperately needed hope. As a supportive source of food, clothing, showers, laundry, and a place to receive her mail, Horizon House became her support and her community. She was no longer facing homelessness alone.

Elnora entered a Job Readiness Training class with the goal of becoming a Certified Nursing Assistant. A Vocational Case Manager worked closely with her in partnership with WorkOne Indy so that Elnora could attend the required classes.

The path was not easy, but it was life changing. Through hard work and ongoing support, Elnora achieved her goal and secured employment with a senior living community in its memory unit. Working with Horizon House as a partner, her hope became reality and Elnora has been able to be a productive member of the community, making an impact with those she helps. 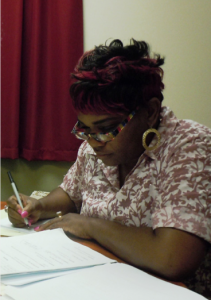 "Horizon House became her support and her community and she was no longer facing homelessness alone." 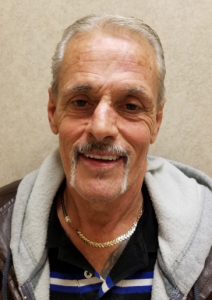 "For years I cared more about others than
myself and I was just tired of being tired."

As a seven-year-old in the 1960’s, Donnie’s family life in the hills of Kentucky centered around alcohol — moonshine, specifically. Easy access lead to an eventual downward spiral into alcohol and drug dependancy. Fifty years later, Donnie was able to overcome drug use, but he was not able to escape the grasp of alcoholism. And, homelessness became his day-to-day reality.

On one of his darkest days, Donnie crossed paths with members of the street outreach team and eventually made his way to Horizon House. Once there, he was able to connect with intensive case management, and entered a detox program that put him on a path to sobriety. With four months of success, Donnie was on track to tackle his next obstacle – permanent housing. Reflecting on his journey to Horizon House Donnie shared, “For years I cared more about others than myself and I was just tired of being tired.”

With a sparkle in his eyes, Donnie beamed about his hope for the future. He would love to enroll in a Criminal Justice program at Ivy Tech. With a journey not yet complete and a work in progress, Horizon House has empowered Donnie with hope for a new path in life.