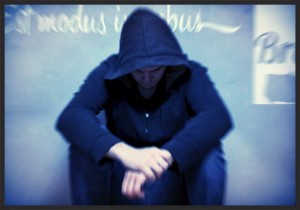 This message was posted to our Facebook page on January 6, 2016. That’s how we reconnected with Rick, who had been at Horizon House over 20 years ago, when we were housed at Shepherd Community Center.

Life on the Streets

Rick was homeless for two long years, due to a long-term addiction. He drank himself into oblivion each day, and slept wherever he passed out—including alleys, parks, and doorways. There’s a lot he doesn’t remember from those years.

One memory does stand out: Released from the hospital after an overdose, he was huddled in a doorway. It was 20 below zero, and he didn’t have a coat. A man passing by noticed the shape Rick was in and returned with a coat. “This guy couldn’t not help me,” Rick says. “He was moved by how bad I looked.”

This man’s act of compassion, Rick says, showed him he was worthy of love.

Rick was never heard, never seen. Everyone who touched him felt the need to put on gloves first.

During his stops at Horizon House, Rick would get something to eat, take a shower, see the doctor, and more. A turning point came when Rick met with a case manager. She helped Rick realize he was worthy of more, and helped find a recovery program for him.

We invited Rick for a tour of Horizon House. We thought he might like to see what we’ve added in our present location—services like the on-site medical and mental health clinic. Rick chose February 10th for his visit—the 20th anniversary of his sobriety. While giving the tour, we could tell it was not easy for Rick to relive some of the memories that came up for him.

“My sobriety anniversary and visiting Horizon House have taken me back through a lot of memories of those days on the streets” Rick told us. “Some bad and some real bad. Horizon House did a lot for me and maybe saved my life more than a few times.”

Today Rick has a great job, owns a home, plays in a band, and gives back to the community. Once a month, he speaks to third-year medical students about treating people with addictions.

Will you help the many neighbors like Rick who are still homeless in our community? Will you look into their eyes and see another human being? Your donation supports our skilled and specially trained staff in their work: to empower each homeless neighbor to live a meaningful and productive life. What seems to be only shelter for a day truly can become stability for a lifetime!

In Rick’s words: “Thank you, Horizon House—you have become the substance of great vision and dreams. You give homeless individuals a face and a voice when they do not have one of their own.”

To hear Rick’s story in his own words, CLICK HERE.

Your donation can have a deep and lasting impact. You can change the life of another person like Rick. Please make your gift today by clicking HERE.