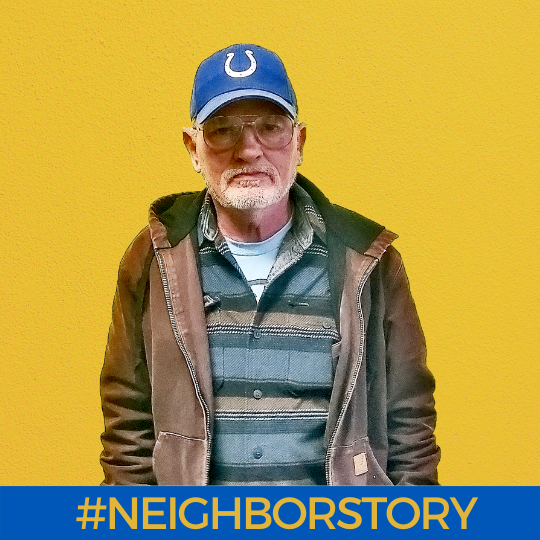 The memories of his wife were overwhelming for him in Indianapolis, so Paul moved to Bowling Green, KY. He took a temporary job there. Within 4 months, he had paid off his car. The next few months went well, but then Paul’s health took a sharp decline. He got pneumonia and had a very hard time recovering.

He came back to familiar surroundings in Indianapolis. He was living in his car and began to visit Horizon House regularly. The staff was persistent in showing kindness and building trust with Paul. He began meeting regularly with a Case Manager and was then, referred to Eskenazi Health Pedigo, our onsite clinic partner. Through a clinic referral, a colonoscopy revealed 19 cancerous polyps. He had surgery in October of 2019. He is believed to now be cancer free. His follow up care has continued at the clinic.

He kept visiting Horizon House and meeting with his Case Manager. He secured a job and got a referral to temporary shelter. Two Horizon House staff spoke of their admiration of the changes in Paul. One said, “It has been amazing to see his change of heart.” Another commented, “It was hard to connect with him when he first came. We kept extending kindness and I am so proud of how far he has come. I look forward to seeing him each time he visits now.”

Paul just got word that he is moving into permanent housing in early April. He celebrated his one year work anniversary. With a smile, the 60 year old shared, “Horizon House has been my strong support team. I do not have enough thanks in me. Appreciation is an understatement for those who give money to Horizon House. The people here have demonstrated love to me.”